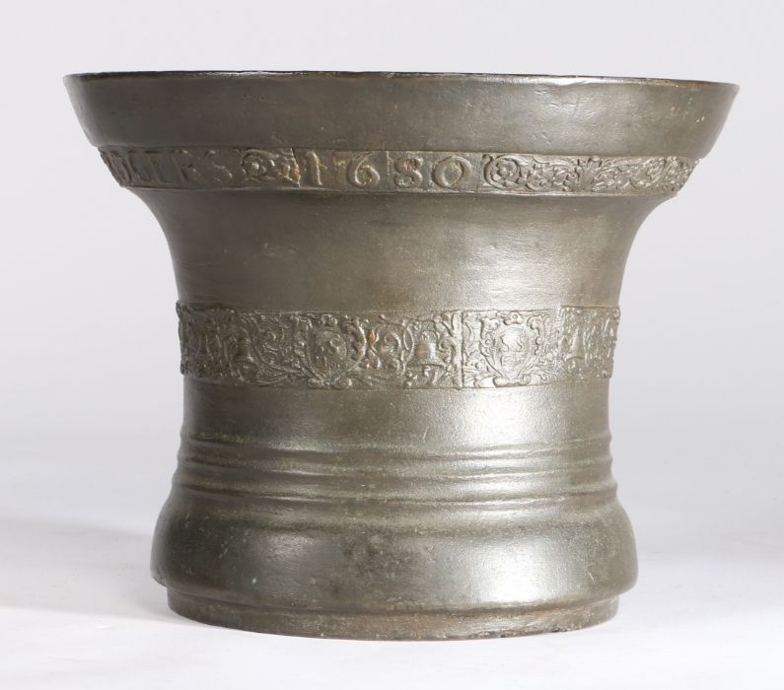 Inscribed beneath the rim ‘THOMAS ROGERS 1680’, along with acanthus, flowerheads and scrolling foliage, a wide band at the waist cast six times with the maker's mark 'SS' and 'Ebor', for York, within a scroll edge cartouche, spaced by bells issuing foliate scrolls, atop three cords, foot with recessed flange, 32.5cm diameter, 25.5cm high Provenance: John Fardon, Peter Hornsby, Roger Rosewell & Christopher Bangs Collections Literature: This mortar is described M. Finlay, 'English Decorated Bronze Mortars & their Makers' (2010), p. 155 The footnote to the John Fardon sale catalogue, Christie's, 1 May 1996 (Lot 63) notes two 'Thomas Rogers are recorded in the area (of York). One at North Loftus, who died in 1684, the other from South Elasball (sic. possibly South Elmsall, West Yorkshire), it is currently unknown who, or whether either was the owner'.  The footnote to the Roger Rosewell sale catalogue, Bonhams, 21 January 2015 (Lot 63) notes other possible candidates, including a Thomas Rogers, who married Mary Freeman in York in 1677, or the Thomas Rogers who married Jane Watson in York in 1642. It is, of course, entirely possible Rogers was not a native of York, or even Yorkshire, as mortars were obviously commissioned on occasion from founders who were not local to the buyer. See for example, a mortar made for Roger Warde, an apothecary of York, by the Whitechapel Foundry of London', illustrated Michael Finlay 'English Decorated Bronze Mortars & their Makers' (2010), p. 70. - Stock Ref:9065-31