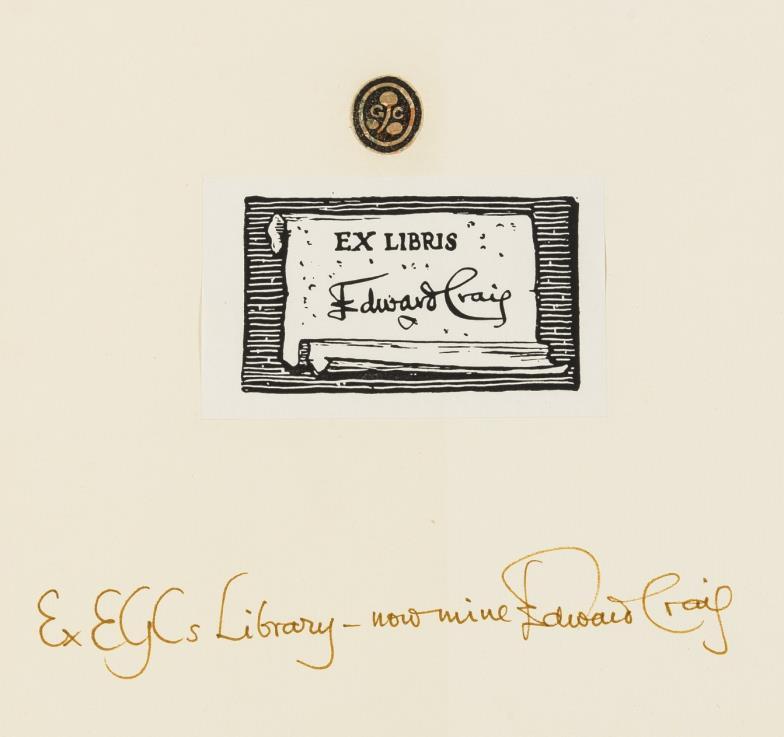 Craig (Edward Gordon) Scene, With a Foreword and an Introductory Poem by John Masefield, number 78 of

100 copies signed by the author, from an edition limited to 1000, 21 plates after etchings by Craig, the author's own copy with his small circular monogram book-label and inscribed by his son Edward ""Teddy"" Craig ""Ex EGCs Library - now mine Edward Craig"" and with his book-plate on front pastedown, with prospectus and reproductions of portrait of Craig by William Rothenstein and Masefield by William Strang loosely inserted, also scrap of notes by Craig with small sketch, prospectus for the Portfolios of Etchings and an engraving of Fingal's Cave loosely inserted, original buckram, gilt, t.e.g., others uncut, torn and defective dust-jacket loosely inserted, 4to, 1923.

? A wonderful association copy of the embodiment of Craig's ideas on theatre design. He envisaged a moveable theatre with floor and roof composed of cubic columns which could move up and down individually, an ever-changing space using screens and lighting to create mood and setting rather than standard set designs. In this work he attempted to portray changing scenes using developing states of prints, each one depicting a moment of arrested motion. His son, Teddy Craig, realised the idea behind the plates and, trying to help his father, built a simple wooden model with rising and falling cubes using pulleys. At first Craig was thrilled that his idea actually worked but when Teddy mentioned that he had discussed the scheme with an engineering friend his father was furious, imagining his great idea was lost and accusing Teddy of betrayal. The model was banished to the cellar and never developed.