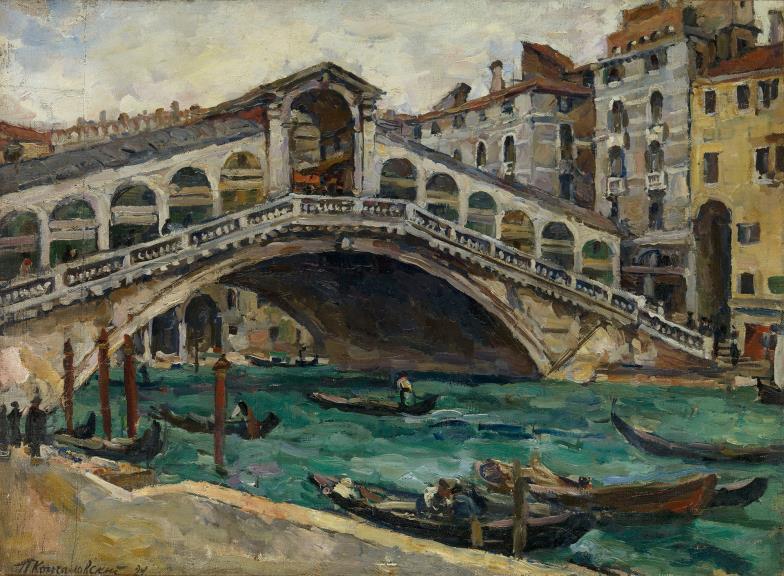 numbered "553" and dated on the reverse. Oil on canvas, 75 by 102.5 cm. Provenance: Private collection, USA.
Russian Sale, Bonhams London, 9 June 2008, lot 29.
Acquired at the above sale by the present owner.
Private collection, Switzerland.

Petr Konchalovsky’s Ponte Rialto, Venicebelongs to the famous cycle of six Venetian views painted in the autumn of 1924, heralding a new stage in his artistic career.

Venice came to be one of the most important destinations during Konchalovsky’s last Italian trip, which he embarked on with his family in the summer of 1924. Officially, the trip was connected with the Soviet Union’s participation in the Venice Biennale, where a whole wall of the Russian Pavilion was allocated to Konchalovsky’s works.

His first encounter with Venice in July coincided with all the hassle and visits occasioned by the exhibition, and did not make any lasting artistic impression on him. After a week he and his family left for Naples and Sorrento, where they stayed with Maxim Gorky (1869–1936), then spent a month in Rome. It was only in late November that Konchalovsky was back in Venice. His wife Olga Surikova (1878–1958) would recall that, when they returned, “winter had already set in… all the smart foreigners had departed, real Venetians wandered along the empty streets, and old men sat sipping their coffee in the little cafés, served by elderly waiters who resembled them.”

As he came to grips with the genius loci of Venice, Konchalovsky moved from street observations and sketches of the canals, cafés and homely corners that captivated him to the famous landmarks and sights. The series of paintings celebrated the views along the Grand Canal and the artist’s Ponte Rialto, Venice pays tribute to the most important and iconic Venetian landmarks.

Konchalovsky had visited Italy before the October Revolution, staying in Siena in 1912. But he derived something quite different from his 1924 trip. His Venice views were painted with an enthusiasm fired by contact with the masterpieces of the great Venetian artists like Tintoretto and Veronese, and bear the imprint of the Old Masters’ palette. They are also imbued with an amazing sense of freedom and a material immediacy of light and colour.

Although he depicts the Rialto Bridge on a grey, chilly winter’s day Konchalovsky endows the ancient canal banks, decaying houses and the bridge rearing up from the cold, turquoise-streaked water with a palpable materiality and inner light. Here, as in all his Venetian canvases, Konchalovsky chooses a low vantage point that enables him to capture not only the main bulk of the famous architectural landmark, but also a stretch of the embankment with fishermen huddled near the tall, red mooring posts, as well as a broad sweep of water covered with gondolas despite the gloomy emptiness of winter.

This landscape, with a rich range of colours typical of Konchalovsky’s Italian works of 1924, stands out because of its energetic composition: the light, cloudy-grey sky, the rippling waves and the massive, greyish-ochre stone features of the bridge and the buildings behind have coalesced to form a single, living image.

A sketch of this composition done in pencil on a large, wide sheet was shown at the Konchalovsky exhibitions held in 1929 and 1960.

Konchalovsky would later consider that his Venetian paintings were insufficiently analytical, lamenting that the euphoria generated by the mass of urban impressions had left him painting with feeling rather than reason.

“I was sad to leave Venice,” he admitted. “How many artists painted it in times gone by all had their own Venice, and all painted it correctly. How I regret that I was then in the grip of a bout of ‘thoughtless’ painting, and failed to set myself tasks of an analytical nature. Although we did not stay in Venice for long, I could still have captured at least a fragment of her soul.... Yes, it was a happy journey, full of joy. People liked all the works I brought back, and they were successful, but I am still dissatisfied with them. They would have been better if I had not been so captivated, to the point of total enslavement, by the perfect beauty of everything I saw. Admittedly, this ‘captivation’ gave my painting a new warmth and saturated it with emotion – but, whenever I painted, I was not completely in control of myself, and that, in my view, is bad for a painter.”

Yet his contemporaries, and above all their successors, see the chief merit of his Venetian paintings as residing in this “emotional captivation” and sensuality, which justifies the best paintings in the cycle, such as Ponte Rialto, Venice, being assigned to the culminating period of Konchalovsky’s career.