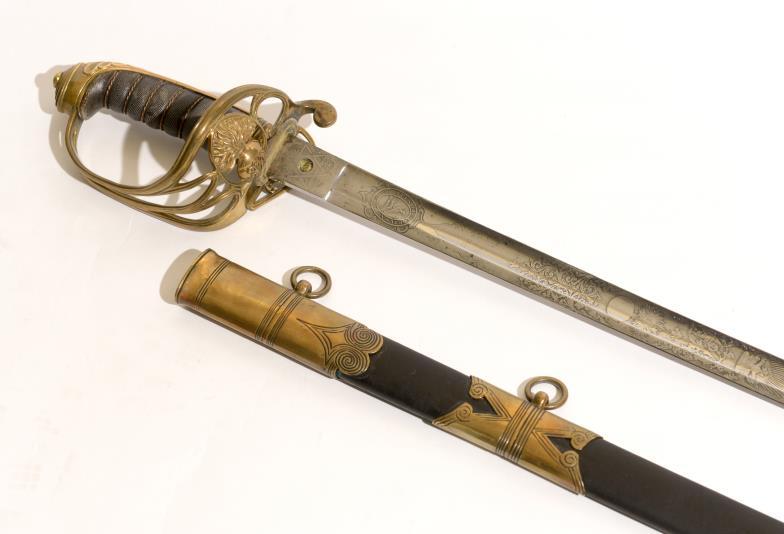 with Lord Chelmsford's family crest on the blade. Gothic hilt with extremely clean and crisp 32" slightly curved blade, contained in a black leather scabbard with brass mounts. the 1822 pattern sword has VR and Grenadier Guards Flaming Grenade device, which is also inset in the gilt hilt guard. Provenance. Purchased as Lot 38 of the DNW Sale of the 14th December 2006. Frederic Thesiger was first the Lord then 2nd Baron Thesiger. Born 31/05/1827 he died of a seizure whilst playing snooker at the United Services Club on the 9th April 1905. Educated at Eton his Military Service was to begin, with a failure in 1844 to purchase a Commission in the Grenadier Guards. He was successful in joining the Rifle Brigade later that year. Then in 1845 he purchased a position, in the "Grenadier Guards. He served in the Crimea receiving the Crimea Medal, Turkish and Sardinian Medals also the Order of Medjidie 5th Class (MID). Then in the Indian Mutiny as a Lt Col 95th (Derbyshire) Regt (MID) later as an ADC or DAAG. Again in the Abbassynian War he was at Magdala and awarded a CB also made ADC to the Queen.. He met and befriended Sir Henry Bartle Frere, during his service. In South Africa with the local rank of Lt General in 1878. He successfully completed the 9th Cape War in 1878. The Disasters and final then Victory at the burning of Ulundi, are all well known. It was this last gasp victory before Garnet Wolseley took command, that partially rescued his reputation. ( 1879 he was awarded the GCB) His part in Zulu Dawn was played by Peter O'toole . He is buried in Brompton Cemetery London. See Illustration