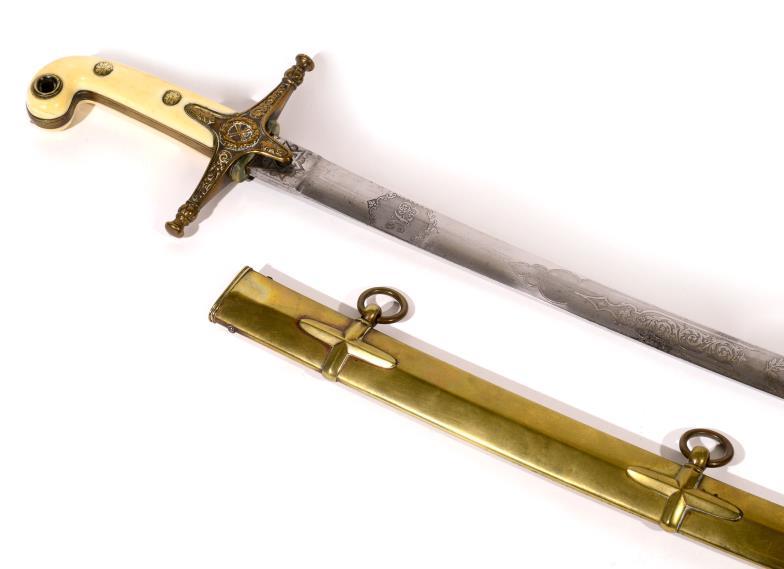 Four rosettes on the grips and crossed Baton & Sword on the crossguard. Complete with a brass scabbard and clean 31.1/4" blade. Etched with crisp designs of both General Officers Insignia and Crown above VR. With the initials E F C on the blade, the property of Sir Edward Chapman. KCB FRGS. General Sir Edward Francis Chapman was born on the 14th November 1840 and died in May 1926. Commencing his service in the Bengal Artillery in June 1858. Major General in 1889, Director of Military Intelligence 1896-1901.1 Retiring as Master Gunner St James Park in 1916 He fought in the Abyssinia War (Despatches and Medal) in the actions at Agoree and the Capture of Magdala. Then onto China afterwards Afghanistan (Chief of Staff to Lord Roberts). He was Mentioned in Despatches twice, awarded the Medal and two bars, also a Khedives Bronze Star. Ghazni and North Afghanistan Field Force, loater in the Kabul/Khandahar Force March to October 1880. Actions of Ahmed Khel then the 1st September Battle, serving in the Relief Force. Again in Burma in 1885. In 1891 he became ADC to Queen Victoria and was a KCB in 1905. Head of the Army in Scotland and Ceremonial Head of the Royal Artillery. See Illustration