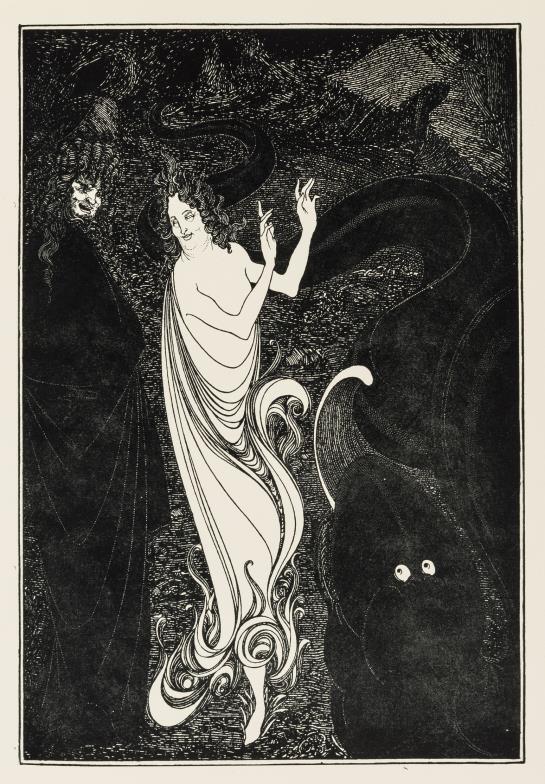 Beardsley (Aubrey).- Jonson (Ben) Volpone: or The Foxe, with An Eulogy of the Artist by Robert Ross,

limited edition, inscribed by Ross (according to pencil note) ""With Ben Jonson's kind regards Dec 95"" on front free endpaper, bookplate of James Denny, 1898 Beardsley (Aubrey) Under the Hill and other essays, 1904; Drawings for the Sixth Satire of Juvenal, 3 plates printed in red, loose as issued in original green printed wrappers, a little soiled and frayed at corners, Jesus Press, 1903 Pope (Alexander) The Rape of the Lock, limited edition, 1897 Wilde (Oscar) Salomé, bookplate of Edward C.Knight, junr., contemporary half brown morocco, t.e.g, others uncut, Melmoth & Co., 1904 Symons (Arthur) Aubrey Beardsley, revised & enlarged edition, extra-illustrated copy with many additional plates tipped in, each labelled in pencil, some foxing, bookplate of James Denny, original cloth-backed boards, 1905, all with plates and/or illustrations by Aubrey Beardsley, all but the third and last two original decorated cloth, designed by Beardsley, most a little rubbed or soiled, some spines slightly faded, all but the second and last Leonard Smithers; and 4 others, Beardsley, 4to & 8vo (10)

? The fifth was issued as a pirated edition by Beardsley's publisher Leonard Smithers under the imprint Melmoth & Co.. It was the first edition to include all 16 of Beardsley's Salomé illustrations, the first ""authorised"" publication of this work was not until 1907.