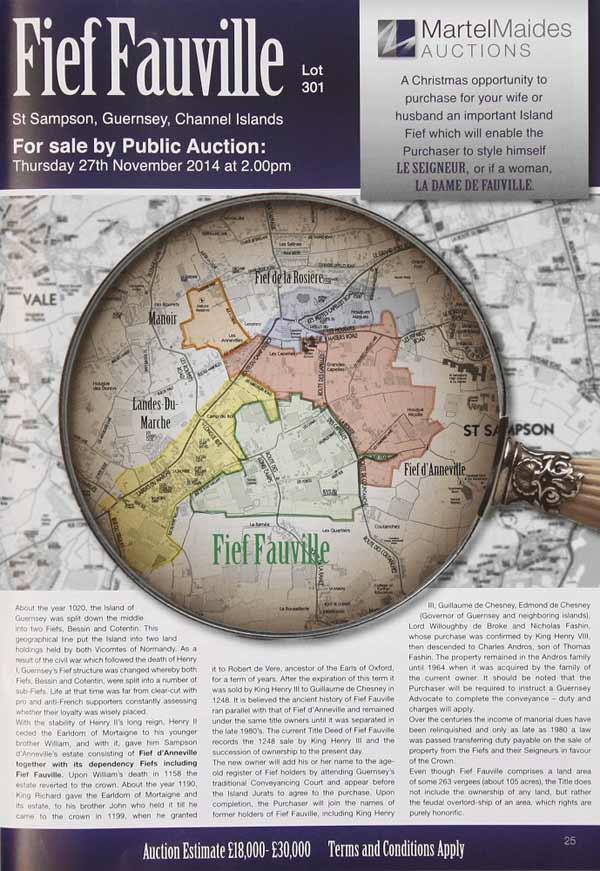 2014 at 2.00pm A Christmas opportunity to purchase for your wife or husband an important Guernsey Fief, which will enable the purchaser to style himself Le Seigneur, or if a woman, La Dame de Fauville. About the year 1020, the Island of Guernsey was split down the middle into two Fiefs, Bessin and Cotentin. This geographical line put the Island into two land holdings held by both Vicomtes of Normandy. As a result of the civil war which followed the death of Henry I, Guernsey's Fief structure was changed whereby both Fiefs, Bessin and Cotentin, were split into a number of sub-Fiefs. Life at that time was far from clear-cut with pro and anti-French supporters constantly assessing whether their loyalty was wisely placed. With the stability of Henry II's long reign, Henry II ceded the Earldom of Mortaigne to his younger brother William, and with it, gave him Sampson d'Anneville's estate consisting of Fief d'Anneville together with its dependency Fiefs including Fief Fauville. Upon William's death in 1158 the estate reverted to the crown. About the year 1190, King Richard gave the Earldom of Mortaigne and its estate, to his brother John who held it till he came to the crown in 1199, when he granted it to Robert de Vere, ancestor of the Earls of Oxford, for a term of years. After the expiration of this term it was sold by King Henry III to Guillaume de Chesney in 1248. It is believed the ancient history of Fief Fauville ran parallel with that of Fief d'Anneville and remained under the same title owners until it was separated in the late 1980's. The current Title Deed of Fief Fauville records the 1248 sale by King Henry III and the succession of ownership to the present day. The new owner will add his or her name to the age-old register of Fief holders by attending Guernsey's traditional Conveyancing Court and appear before the Island Jurats to agree to the purchase. Upon completion, the Purchaser will join the names of former holders of Fief Fauville, including King Henry III, Guillaume de Chesney, Edmond de Chesney (Governor of Guernsey and neighboring islands), Lord Willoughby de Broke and Nicholas Fashin, whose purchase was confirmed by King Henry VIII, then descended to Charles Andros, son of Thomas Fashin. The property remained in the Andros family until 1964 when it was acquired by the family of the current owner. It should be noted that the Purchaser will be required to instruct a Guernsey Advocate to complete the conveyance - duty and charges will apply. Over the centuries the income of manorial dues have been relinquished and only as late as 1980 a law was passed transferring duty payable on the sale of property from the Fiefs and their Seigneurs in favour of the Crown. Even though Fief Fauville comprises a land area of some 263 vergees (about 105 acres), the Title does not include the ownership of any land, but rather the feudal overlord-ship of an area, which rights are purely honorific. Note: Buyer's Premium on this purchase is 10% Conditions of Sale in respect of Fief Fauville 1) The highest bidder to be the purchaser who will immediately after the sale enter into a formal Conditions of Sale with the Vendor (copy available for inspection at the auctioneer's offices, or by fax/email). 2) The Purchaser shall pay a deposit of 20% of the purchase price plus the entire buyer's premium immediately after the auction and the balance of the purchase price will be paid on completion which shall be on or before 8th January 2015. 3) The purchaser shall instruct a Guernsey Advocate to handle the matter of completion and shall pay that Advocate all his/her fees and duties applicable to such completion of purchase. It is suggested that prospective bidders ascertain from an Advocate the amount of these fees and duties before bidding. 4) The sale is subject to the vendor proving good title to Fief Fauville.